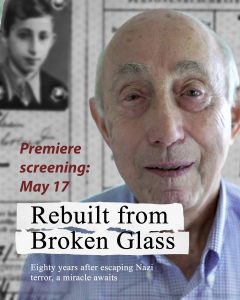 The premiere screening of Rebuilt from Broken Glass is set for Tuesday, May 17, at 7:00 PM! Join us in person at Congregation Beth El in Voorhees, NJ, or via livestream!

The documentary features South Jersey’s Fred Behrend. He witnessed the flames of Kristallnacht in 1938 at age 12, seeing synagogues on fire, and soon fled Nazi tyranny. Several years after entering America, he would earn a personal victory over the Nazis, teaching democracy as a GI to German POWs.

At age 92, however, he discovered that a miracle still awaited: one that was exactly 80 years in the making.

For tickets, visit: https://bethelsnj.org/film/. Can’t wait to see you there!

Rebuilt from Broken Glass is a documentary film that follows the life of Fred Behrend, whose life was ripped apart by the horrors of Kristallnacht (the Night of Broken Glass). He saw synagogues on fire. He saw Jewish stores destroyed, the glass from their storefronts littering the streets. His father was taken to a concentration camp. Fred’s tale of escaping the Germans, only to turn the tables on them during his life, was extraordinary all on its own. As a U.S. Army soldier, he taught the ways of liberty and democracy to hardened Nazi POWs. Little did Fred know that on the 80th anniversary of Kristallnacht, he would suddenly be reunited with a long-lost friend with whom he experienced that fateful day. We will watch as the revelation of each other’s tales enlightens the two men – and all of us – on what it takes to endure tragedy and Holocaust survivors’ ultimate triumph: living to pass down their story to new generations. As the two men say: Hitler did not win.

I first met Fred Behrend in 2010 when he spoke at my son’s religious school. I was enthralled not just by his tales of Kristallnacht, escaping to Cuba, and his tales of teaching democracy to German POWs, but his optimistic outlook and unrivaled storytelling ability. The excitement of publishing his memoir had just about worn off when the miraculous reunion by cellphone occurred at a Jewish day school in 2018—exactly 80 years after Kristallnacht. When it turned out the two men for decades had been wintering just 15 miles apart in Florida, it seemed like an unseen force was willing this documentary to happen.

Events like the Colleyville synagogue hostage crisis, the Tree of Life shooting in Pittsburgh, and Charlottesville remind us that anti-Semitism is alive today and an increasing threat. Holocaust education is more important than ever. Nothing is more compelling than the firsthand tales of the Holocaust from survivors, yet it won’t be long before their generation dies out. That’s why it was important to share Fred’s tale while we had the chance. But in sharing this historic tragedy, he also conveys the joy of life, and in so doing, proves it’s hard to hate up close. 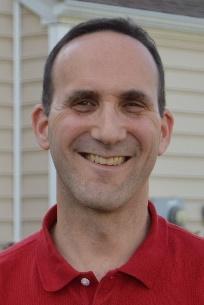 Larry Hanover, Director & Executive Producer
Larry Hanover co-authored Rebuilt from Broken Glass: A German Jewish Life Remade in America (Purdue University Press, 2017). Larry has assisted on the memoirs of another Holocaust survivor and is working on various other book projects. Larry served as manager of public relations for a New Jersey state authority from 2006 to 2010. He was an award-winning reporter for The Times of Trenton from 1988 to 2006 and also worked for the Cherry Hill Courier-Post.

Joseph P. Harris, Archival Producer
Joseph P. Harris began his career working for the U.S. National Archives in the mid-1990s where he maintained the audiovisual collections and provided research assistance to the public. Since entering the private sector in 1999, Joe has specialized in archival research at both the U.S. National Archives and Library of Congress, helping thousands of creative teams worldwide find the public domain content they need. Past projects include the Oscar-nominated films Hidden Figures (2016) and A Night at the Garden (2017), and Colette (2020), an Academy Award winner for best documentary short.

DONATE TO THE PRODUCTION OF

Donations are tax-deductible. Gifts over $250 will receive a letter for tax purposes.

Donate online by clicking or tapping the link below:

Contact Larry Hanover at brokenglass1938@gmail.com if you have questions. Together we make an impact. To make “Never Again” a reality.

Grant from Jewish Community Foundation awarded as fund-raising for Rebuilt from Broken Glass film launches Date: May 16, 2019 CHERRY HILL – The Jewish Community Foundation (JCF), Inc., has awarded a $3,000 grant to Broken Glass Media LLC as fund-raising efforts for a documentary based on Holocaust survivor Fred Behrend’s memoir Rebuilt from Broken Glass officially launched today. Larry Hanover, co-director and co-producer of the film, announced the grant as local officials, leaders of the Jewish Federation of Southern New Jersey, and fund-raising partner Arts Guild New Jersey gathered to watch the premiere of the film’s teaser. Behrend, 92, of Voorhees, told the tale both of his escape and miraculous reunion with a fellow survivor at the event held at the Esther Raab Holocaust Museum & Goodwin Education Center. “Until hatred and bigotry are eradicated, the notion of ‘Never Again’ can never truly be realized,” said Behrend.